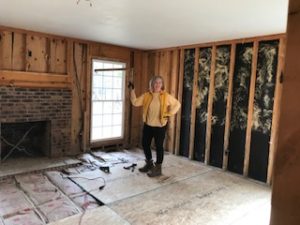 We all read about and saw pictures of the devastation that Hurricane Florence wrecked on eastern NC in mid September. But until you are standing in a house that has been gutted to the studs and see a waterline at chest height, it is hard to imagine the real impact this storm had. Seven members of FPC, led by Carol Anne and Dick Moehring, worked on four houses in Wilmington and Burgaw during the week of 2/11 – 2/15. The two houses in Wilmington were flooded when the roofs were damaged and water poured in over four days. The two houses in Burgaw were flooded by rising water from nearby streams and rivers and sat for two weeks. Each were equally destructive. Some of the home owners had insurance, with sizable deductibles, and some did not. Some were able to start the deconstruction work and some were unable to do it on there own. All needed our help. There were three single women, one with a son and one couple with a little girl. The families wemet, shared the frustration in dealing with government agencies, insurance companies and the challenge of finding contractors willing to help for a reasonable price. All were grateful forescaping the storm without harm to themselves and were thankful for our help. 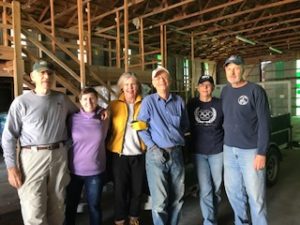 We hung sheetrock, tore up floors, staged material for other groups who are coming in the next few weeks and started installing flooring. It was a week of hard work and sore muscles. But wealso experienced hugs, tears, smiles and a sense of helping neighbors move forward out of disaster. There is much remaining to be done. We hope to form additional groups to go down in the future.

If you are interested in helping for a day or two or a week, please contact Kathy Johnson: (919) 833-4070 or kjohnson@fpcraleigh.org