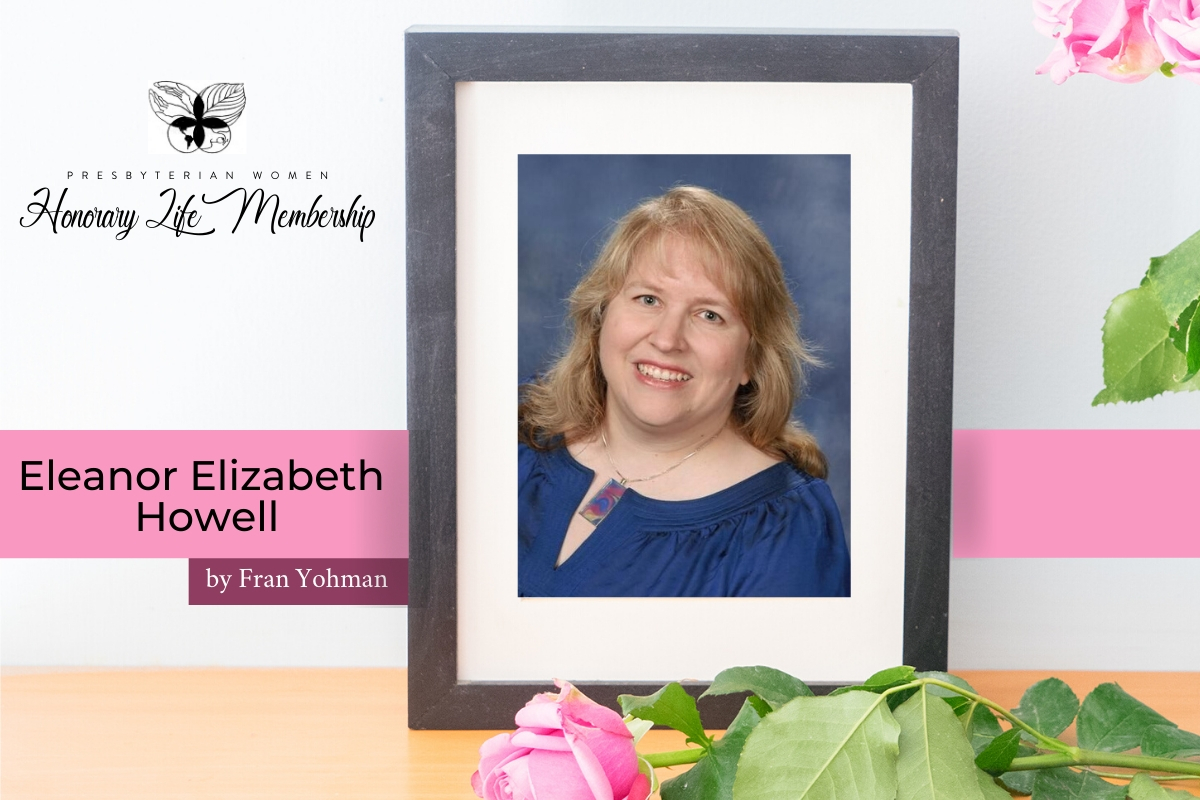 It is my privilege to speak about Eleanor Howell today. Last October, many of us here at First Presbyterian Church were shocked and saddened to learn of the death of this vibrant, active, Christian member of our congregation. On this special day for recognizing Presbyterian women who have and are continuing to serve here at FPC, it is fitting that we honor Eleanor who now makes her home in heaven.

Eleanor was born on July 12th, 1972 in Nashville, Tennessee to David and Barbara Howell. She was raised along with her sisters, Virginia and Rebecca, on the family farm in Mt. Juliet, Tennessee and attended public school there. Eleanor was a 5th generation Presbyterian, participating in Sunday School and youth group at church and attending camp during the summers. Additionally, she participated in girl scouts for 12 years. Eleanor was Valedictorian of the Mr. Juliet High School Class of 1990 and attended Miami University in Ohio as a Harrison Scholar where she earned both her bachelor and master’s degrees.

During her college years, Eleanor worked at Holston Presbytery Camp in Banner Elk, NC where she made life-long friends. Rev. Dr. Byron Wade was one of those friends and spoke at her Witness to the Resurrection service of Eleanor’s love for the camp and all its activities and relayed that Eleanor was a rule follower but a true friend who never ratted out those who weren’t. I can attest to that when I think back to a mission trip we took with our high school youth to Tennessee. Each day at lunchtime our group went to Subway to use the bathroom and eat. Since leaving our worksite during the day was against the rules, Eleanor found herself once again with rule breakers. She couldn’t say no to a female 20+ years her senior when it came to bathroom time, so she drove all of us to Subway but never got out or ratted on us to the authorities. Greatly appreciated.

After college, Eleanor got really smart and moved to Raleigh to study at NCSU. (For you UNC fans, she later got a certificate in Core Public Health Concepts from UNC.) She then went to work for NC State Center for Health Statistics where she became Director in 2014. She loved living in Raleigh because she was between the mountains and the ocean and could spend time with family and friends at both places.

Eleanor loved to travel, visiting the UK, Scotland, and many places in the U.S. She loved music (played clarinet, keyboard and percussion in high school) and had season tickets to the North Carolina Symphony.

Eleanor joined First Presbyterian in Raleigh in 1995 as an affiliate member and then became an official member in 1996, where she served as deacon, elder, handbell choir member (and a short stint as assistant director), circle leader, library volunteer, middle school advisor, and on various committees including Scholarship committee which she chaired for several years.

Eleanor loved her family, her work, and her church. She is greatly missed in all three of these areas. So, it is with great pleasure that I present the PW pin and certificate to Eleanor’s mother, Barbara, in honor of this great Presbyterian woman.